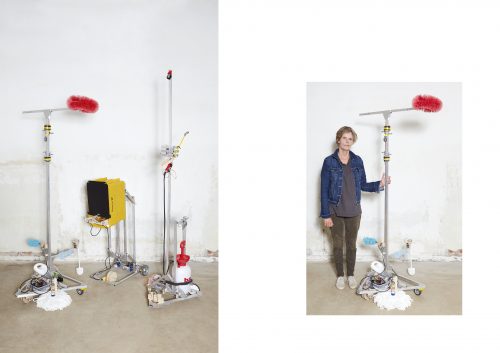 The Post-Labouratory is an answer to the rapid automation of labour and the resulting cultural crisis. It liberates us from the idea of the necessity of labour and supports us in discovering our true desires. It offers participants the possibility to abolish their job by developing a robot that does their labour with the engineering help of post-labour companions.

For the documentation of human skills, knowledge, tools and experiences the working process of each participant is recorded. This documentation feeds the development of the robots but is also stored in the database of the Post-Labouratory.

Through the abolition of their labour, the participants can explore a post-labour future. The post-labour companions assist the participants to reconsider their desires during individual sessions. The creative action of making and discussions about work, leisure and life enables this passage. The Post-Labouratory claims that the quality of automating technology increases if the specialists – people working in the job to be automated – take an active part in the development of the robot. During the development process the robot becomes the apprentice of the participant.

Nominated for the Gijs Bakker Award 2017

First projects of the Post-Labouratory

Read more about the research → From Labour to Work and following projects → @A School of Schools, → @Hustle and → Post-Labouratory meets …