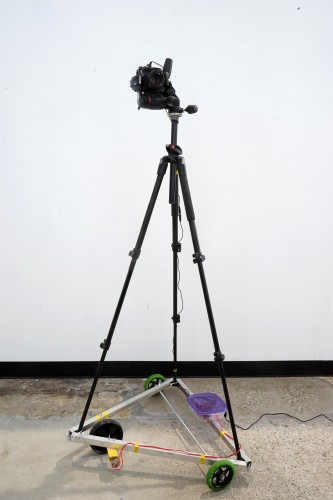 As part of the Hustle exhibition by Science Gallery Lab Detroit a prototype of a new robot was created together with Mark Sullivan, educator, composer and photographer and active in many different ways. 0000000005 MMM performs parts of Marks former labour by taking care of a new photography project and taking pictures of passers-by from the inside of the exhibition space. The robot moves back and forth and overlays five images in a row – a technique Mark often uses when photographing. While the robot documents the life on Woodward Avenue in downtown Detroit, Mark has more time to make music and freedom to follow his other interests.

Besides realizing one new personal automation project it was interesting to test and discuss the concept of the Post-Labouratory with an example of creative labour and in a new cultural and historical context – in Detroit, a city which is already since the last industrial revolutions dramatically influenced by automation and where citizens have a very different perspective on the current working culture, job market and the future of labour compared to the dutch context where the project started originally.